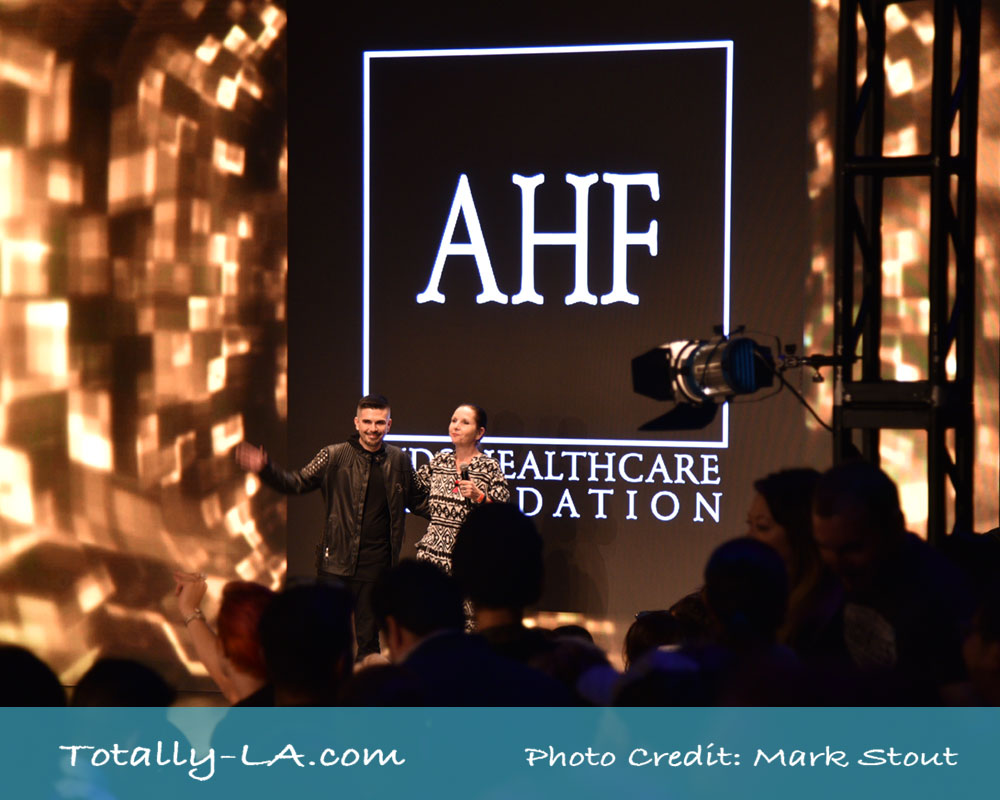 As Art Hearts Fashion founder took to the stage the audience rose and the room took on the glow of candles that are lit at major concerts in respect to the performer.  Unfortunately, these weren’t candles.  They were the dials of camera phones illuminating the audience area.  It wasn’t a tribute.  It was an act of disrespect toward what was otherwise an extremely well organized show.

Upstairs a large hall was crammed with makeup artists from Style the Runway and, of course, models getting primped up to their finest.  As always, the Art Hearts Fashion show was a well oiled machine and a perfectly presented event.  One of the finest in the fashion industry.

When the runway show started it all fell apart.  Founder Erik Rosete took the stage to announce the start.  The audience rose and raised their (not so) smart phones… and they never sat back down!  Your best hope of seeing the show if you were in one of the back rows was to watch in in the monitor of the person in front of you’s (not so) smart phone camera.

Unfortunately, we will never know if the “ovation” that lasted the entire show given was out of respect for the excellence of the show, or the egotistic belief that their (not so) smart phone photo was more important than the enjoyment of the show for everyone else in the audience.

I’ve never seen such a disrespectful display by an audience in my 25 years of photographing events!

The tradition of lighting candles at performances dates back to 1969.  It was at the original Woodstock Festival. Melanie Anne Safka-Schekeryk, better known as Melanie, was performing in the rain when she saw the hillside light up with thousands of candles. It is not known why the audience spontaneously began lighting candles, but the sight motivated Melanie to write a song about it called “Candles in the Rain”.

This has carried forward at major concerts and events as a sign of respect, and is frequently seen after the artist has come forward through a difficult time.  This isn’t what occurred at Art Hearts Fashion.  As the front row stood and crowed forward into the isle to get the best view down the runway with their (not so) smart phone cameras for their Instagram feeds with their bought and paid for computer generated likes and followers, so did the remaining rows.

It didn’t stop there. (Not so) smart phone cameras were shoved in front to the faces of others trying to watch the show.  A few (not so) smart phone camera warriors took to displacing the people in rows in front of them to get a better view of the runway.  I mean it’s important.  Right?  They have their computer inflated artificial followers to bring the event to.  The people who bought tickets to actually see the show don’t matter.

As a credentialed press photographer and long standing event photographer, I have always been expected to follow some strict rules of conduct observed by all event photographers.  The first of which is that we did not, under any circumstances, block the view of the people who were there to see the event or get in the way of the event itself in our effort to get a good shot.

The Art Hearts Fashion show is one of the best fashion productions put on in the United States.  It is a tragedy that the Instagram warriors had to ruin it with their (not so) smart phone cameras for everyone that actually paid to see the show!

Until these folks can learn to behave like professionals which I don’t foresee happening any time soon, it would behoove event producers to make an announcement at the beginning of shows and events asking patrons to keep their phone in the pockets.

Until either of those happen, I’d advise making sure you get a front row seat and become willing to shove the person that jumps in front of you back down in theirs.

What Is The Tallest Building in Los Angeles?