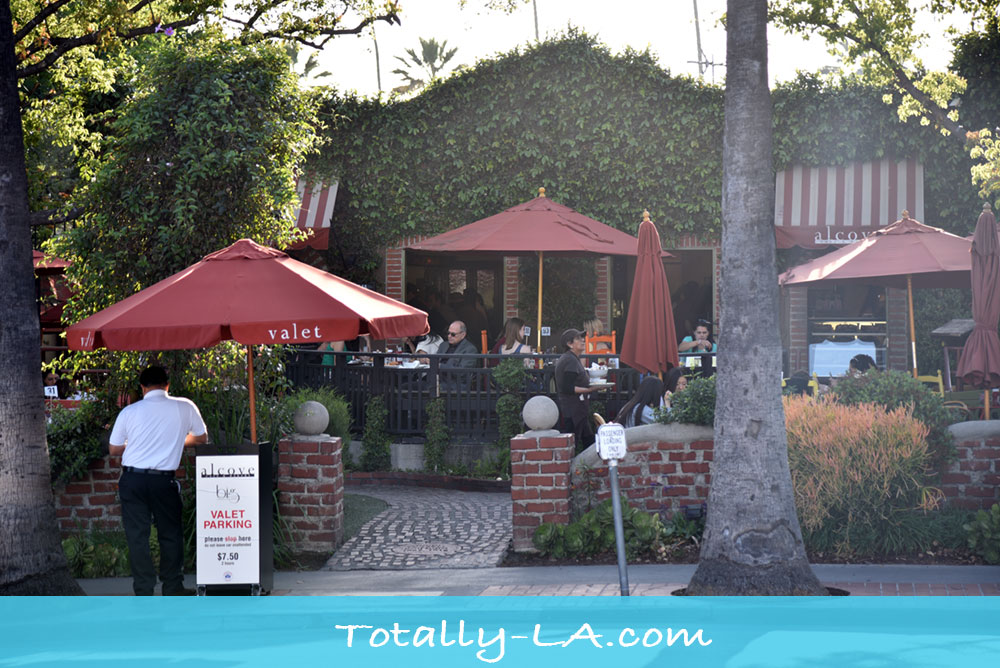 If you are looking for the best patio dining in the Los Feliz Village, head on over to the Alcove Cafe & Bakery located at 1929 Hillhurst Ave.

The restaurant is housed in two of the oldest houses in Los Feliz.  They are a Spanish duplex but in 1916 and a Craftsman cottage built in 1897.  In the ivy covered courtyard between them the relaxing outdoor dining area.

The homes were converted to commercial use in the 1970’s and in 2003 they were purchased by The Alcove an underwent extensive renovations to restore them as much to their original condition as possible.  The restaurant opened in 2004.

Like many of the other shops and restaurants in the Los Feliz Village, the Alcove prides itself in using products that are local and organic, as well as proteins raised in cage-free and grain-fed and non-GMO corn-fed environments when available.

The menu is American cuisine, but it doesn’t lack a sense of flair.  You will find healthy “personal trainer endorsed” breakfasts, and other breakfasts ranging from things such as “lemon ricotta pancakes” to your standard bacon, eggs and pancakes type meals.

Most of the lunch and dinner menu are things that will be between slices of various types of bread… naturally, since the Alcove is also a bakery.  But there are things like the Mediterranean Steak Salad, guacamole, and bacon wrapped dates as well.

The coffees are hand roasted by an award winning micro roaster.  I’ve always thought a little chocolate goes well with a good coffee and the Alcove has  their own specialty Belgium chocolates. So go ahead and splurge.

The Fonda Theatre in Hollywood

El Capitan Theatre on the Hollywood Walk of Fame