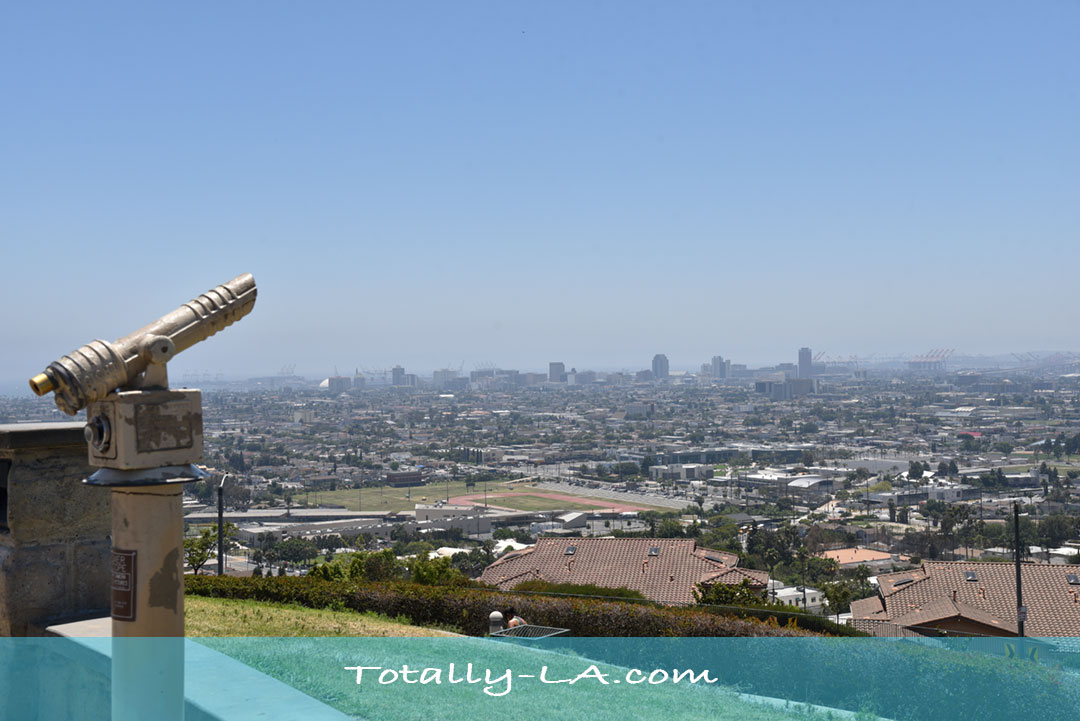 If you are visiting Los Angeles, or if you are an Angeleno, and want to find a great spot to view and take photos of the Los Angeles Harbor you’ll want to head to nearby Hilltop Park.

As you approach this park in Signal Hill it’s immediately apparent that this area is about two things: oil and views.

The homes are large and beautiful, and many of them come complete with an oil pump jack in the back yard.  It’s doubtful that any of the homeowners also own the oil rights, but I do wonder if any of them are paid royalties for having the oil extracted from under their homes.

Oil royalties aside, the views from Signal Hill of the Long Beach and Los Angeles Harbor, the Vincent Thomas Bridge, the Queen Mary, Catalina Island and out over the Pacific Ocean are so spectacular that it has also spurred development of luxury homes in gated communities.  The owners are apparently quite willing to put up with the oil pump jacks to have their views.

Hilltop Park is at the very crest of the hill.  Though only about 3 acres, it was well thought out in terms viewing and picnic areas, restrooms and art.  A circular area in the center has benches surrounding a short wall with telescopes looking out in all different directions.

There are three concrete stands with cut out “frames” overlooking various parts of the city.  The picture in the “frame” becomes the view of the city revealed.  Through one you are looking directly out over the Vincent Thomas Bridge.  Another looks north over Los Angeles and the third looks along the Pacific coast toward Huntington Beach.

The only thing marring the views at all is the fog that seems to constantly be in the air down by the harbors.  Even on exceptionally clear days when I have driven out toward the harbors I find the fog is present.  This is also true viewing the harbor from Angel’s Gate Park where  the Korean Bell of Friendship is located… my other best spot to view Los Angeles Harbor.

The nighttime view is also spectacular.  The city lights of Los Angeles will shift your gaze from over the harbor to the expansive city.

The Oil History of Signal Hill

Signal Hill’s history far pre-dates the discovery of oil on the hill, but we’ll start at that point.  It’s been known since ancient times there was oil in the area.  It seeped up and was used for a variety of purposes.

Several oil explorers searched for oil in the area in the early 1900s and left without discovering it.  But geologists from Shell Oil believed that others simply hadn’t drilled deep enough.  In June 1921 they struck oil at the Alamitos Number One well.  It was under so much pressure that it gushed 114 feet into the air.  By June 25th the well was producing 600 barrels of oil a day!

So many oil derricks sprung up on Signal Hill that it became known as “porcupine hill” and by 1923 Signal Hill was producing 260,000 barrels of oil a day.  The discovery of oil in Signal Hill caused California to be the source of one fourth of the world’s oil production.

The Long Beach oil field is still going strong as evidenced by all the pump jacks in the neighborhoods.  There’s also a bronze statue directly across from Hilltop Park entitled “Tribute to the Roughnecks” by artist Cindy Jackson.  It was erected to commemorate the men that brought wealth to the state of California.  There are a number of other monuments to the oil and gas industry and we will be writing about them soon!

Hilltop Park is located at 2351 Dawson Ave in Signal Hill.  Note, Signal Hill is  surrounded on all sides by the city of Long Beach.

Setting Up The Studio in Downtown LA