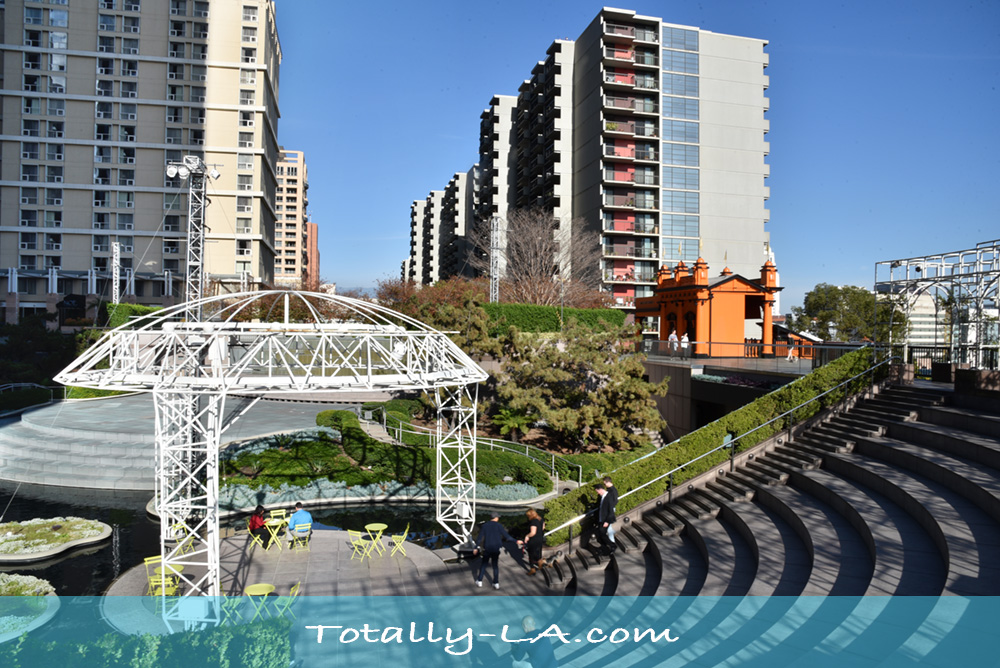 If you need a good reason to ride Angels Flight, other than how utterly cool it is, or that it is a favorite LA tourist attraction (and by far one of the cheapest), I have one more.  It’s what you get to see at the top.

As you step off Angels Flight on the top, it is as if you have entered another world.  A beautiful oasis sealed off from the rest of the world by the tallest, most modern and beautiful skyscrapers in Los Angeles.  The oasis is called California Plaza and it is located at 350 S. Grand St. (Note: if you are taking Angels Flight up to the plaza, you catch it on Hill St between 3rd and 4th.)

California Plaza is both a performing arts plaza and an insanely cool food court.  It’s so cool that I’m thinking the next time a friend flies into Los Angeles for a visit, I might just drive them downtown, take the Angels Flight Railway up to the top, buy them a cheese sandwich at Asiago Grilled Cheese on the California Plaza and eat with them at a table by the lily ponds.  Oh, you can also enter the plaza from Olive Street instead of taking Angeles Flight up the steep hill… but if you do you are cheating yourself out of one of the best parts of the experience.

I know, that’s a bit of work for a grilled cheese sandwich, but my friend would be forever impressed by the “coolness” of LA.

The plaza is also the California Marketplace which has a few shops and several restaurants.  Restaurants on the Plaza include: Blue Cow, Starbucks, Poke Bar, Georges Greek Grill, Mixt Greens, Asiago Grilled Cheese, Pressed Juicery, Beyond Food Mart, Stems and Panda Express.  One of them should thrill your taste buds.

Also while you are in the neighborhood, you can swing by the famous Bradbury Building, The Million Dollar Theatre and, in case the food at California Plaza isn’t enough the Grand Central Market.  All are within a block or two of the base of Angels Flight. 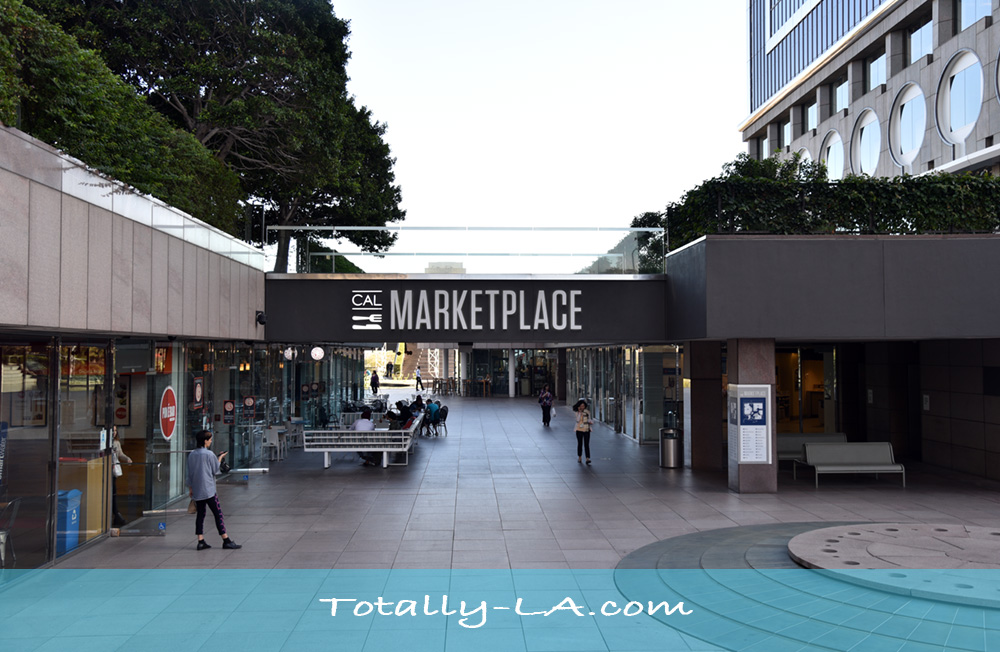 Grand Performances, also located in California Plaza puts on a long running summer event and concert series kicking off in June.  For a list of schedule performances, visit the Grand Performances website.  I believe the concerts are free, but you can get VIP seating in a variety of ways.  VIP seating does cost, but it is very reasonable.

The outdoor venue features several stages and a variety of seating options, including bleachers and cafe-style tables and chairs surrounding the stages and shallow reflecting pools. Grand Performances has presented a wide array of free, all-ages music and cultural events, including film screenings, dance, theater and world-music, classical and pop shows.

Audience capacity is 5,000+ people spread out on the upper and lower levels surrounding the fountain.

There are 350 amphitheater seats and 800 chairs on the lower plaza. Additionally, dozens of benches dot both levels of the concourse. Blankets and low backed chairs are welcome as long as they don’t block designated walking, dancing or wheelchair areas.

Unlike most concert venues,  concertgoers are welcome to bring their own wine and picnic basket.  Of course you can also choose from the many restaurants we listed above for your refreshments. There is a parking structure underground.  I don’t happen to know the rates though.

California Plaza is actually a part of a complex involving two skyscrapers that form the outside boundaries of the plaza.  One and Two California Plaza.  A third was also planned but economics and high vacancy rates the towers when first built prohibited it.

The MOCA Downtown Los Angeles is the only museum in Los Angeles devoted exclusively to contemporary art.  The location is home to almost 5,000 artworks created since 1940, including masterpieces by classic contemporary artists, and inspiring new works by emerging and mid-career artists from Southern California and around the world.

So there you have it.  One more big reason you need to get on Angels Flight and take it to the top.  Both Angels Flight and the California Plaza are very worthwhile candidates for your Things To Do In Los Angeles list whether you are a tourist or a local Angeleno.

The Majority Isn’t Silent, The Media Is