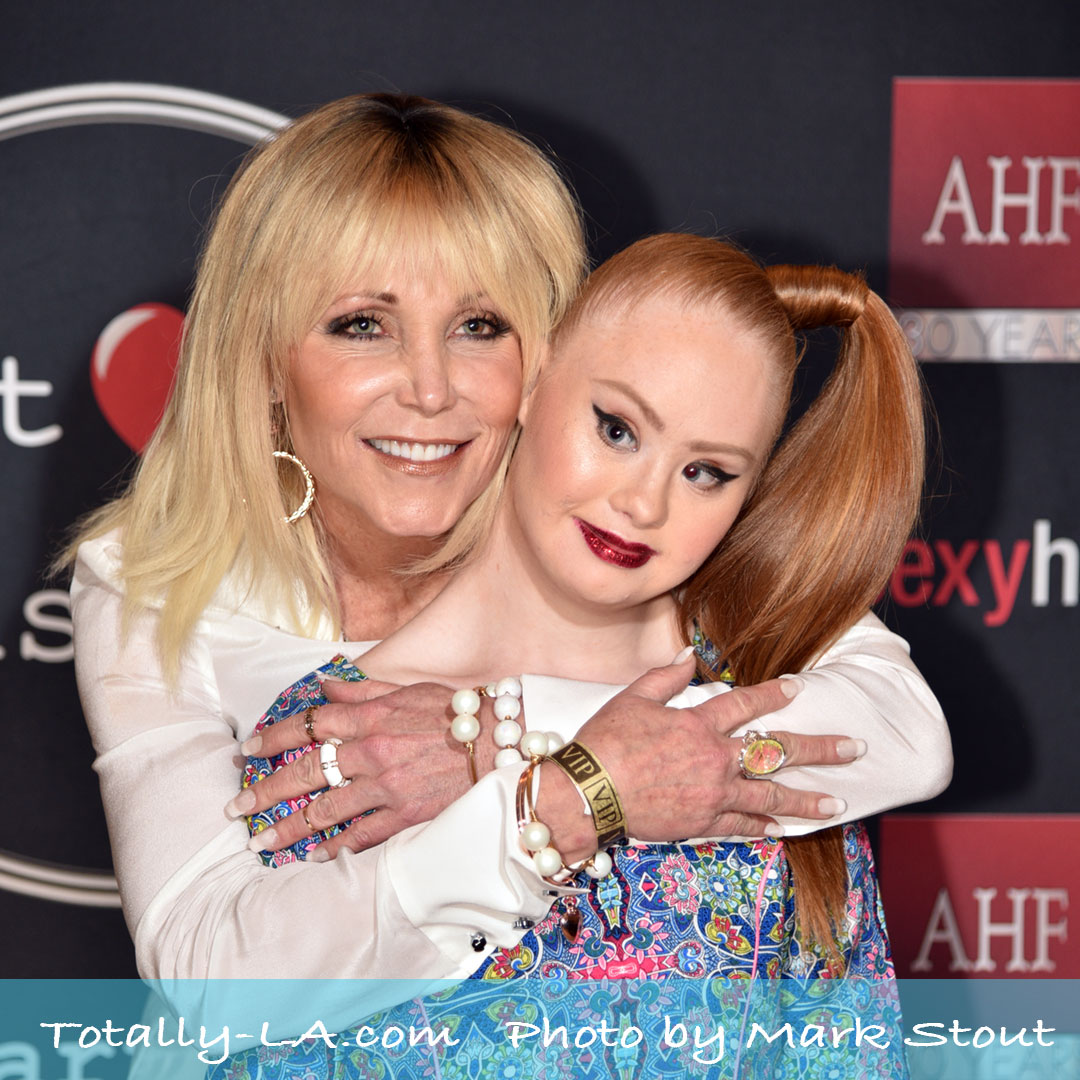 This is probably the most memorable photo I have ever taken.

I met Madeline Stuart and her mother Rosanne at the Art Hearts Fashion runway show during Beverly Hills Fashion week last year at the Beverly Hilton.

I was in Janice Dickinson’s dressing room. Though that was an area reserved for just a few special people, it was a madhouse.  In the midst of it all Madeline began posing for pictures with people, most of whom I didn’t know and her mother.  What struck me then was the intense bond I saw between the two and the unmistakable pride in her mother’s face.

From the audience view, Fashion Week looks like a calm orderly affair.  It couldn’t be more different backstage. The pace, the commotion, the whirlwind of faces is something you have to experience to understand.  I saw Madeline again walking the runway, but in the chaos I was never able to speak with her or her mother again.

Totally LA didn’t exist at the time I photographed her.  I shot the photos for a newswire service I work with.  I didn’t think of it again until a friend of mine shared a post on Facebook about Madeline’s accomplishments and I decided I needed to share Madeline’s story with the world as well.

I love telling the world about people who have risen against the odds to accomplish their dreams. I recently talked about how Carol Burnett got the last word with the Warner Pacific Theatre that had shamed her when she worked there as an usherette by later having her star placed on the Hollywood Walk of Fame directly in front of the theatre.  Madeline’s story is an even greater one of accomplishment, so much so that it doesn’t even compare.

It is also the story of love and compassion and just how much people can and will do for those they love.

In researching this article I got the idea from one that Rosanne has had to defend herself from accusations of being a stage mother, which implies that she is in it for herself, not her daughter.  I find that astonishing.  It would be impossible for anyone that has seen Rosanne working with Madeline to not see the pride, love and compassion she has for her daughter.

Rosanne was told by doctors six minutes after Madeline was born that her daughter had Down’s Syndrome. She was told Madeline would probably only live to be six or seven years old and that she would never achieve anything. She was also advised by friends to put her up for adoption.

Neither Rosanne or Madeline accepted that verdict.  While Down’s Syndrome stunted Madeline’s growth and made it difficult for her to form sentences, she didn’t lack confidence.  She became a dancer and a cheerleader and performed at the opening of the Pan_Asian Games and competed in the Special Olympics.

Then Rosanne took Madeline to see a 2015 fashion show in Brisbane. During the show Madeline said “Mum, me model.”  Rosanne knew how much work that would take but told Madeline if she wanted to commit to the journey, she would fully support her.

Madeline took the challenge and began working out and dieting to loose weight.  When she had done so Rosanne posted before end after pictures on Facebook to encourage others.  It went viral, overnight.  Within a few days her photo had been viewed 6.8 million times. Then it started making headlines around the world.

Madeline did her first photoshoot and was booked to model at New York Fashion Week just a few months later. She became the overnight darling of the fashion industry, but modeling agencies were reluctant to manage her career.  Rosanne put her own career on hold to manage her daughters.

She supports dozens of Non Profits some of which she has made special appearances at, or performed a professional dance routine, or modelled in their fundraising Fashion Shows. Such charities include: Multi Cap Foundation, Endeavour Foundation Australia, Silver Linings Project, Vets Intl, The DisABILITY Museum, Melbourne City Mission, The Carol Galvin Foundation, Kulture City, Embrace Kulture, FUB Sweden, ‘I can, I will’ Australia, Inside Outside Dance Ensemble, Buddy Walk NYC, Horizon Stars – The ARC of the Emerald Coast, Special Olympics of New York, and Cultural Device Project and Radical Beauty Project, among many others.

And there is more.  Madeline also oversees her dance school in Brisbane, ‘Inside, Outside Dance Ensemble’ and continues to participate in Special Olympic games. In February 2017, she launched her own Fashion Label: 21 Reasons Why by Madeline Stuart.

I think it is insanely unfair that some people are handed such overwhelming disabilities when they come into this life.  But Madeline and Rosanne have shown the world that people with disabilities don’t have to settle for being successful at a job that pays less than minimum wage at best…. they can accomplish whatever they set their minds to.

And it is something for the rest of us to think about the next time we feel we have it tough.

Rosanne and Madeline, I tip my hat to you both.  Thank you for the inspiration and courage you have given to so many!

Grauman’s Chinese Theatre Before and After Coronavirus