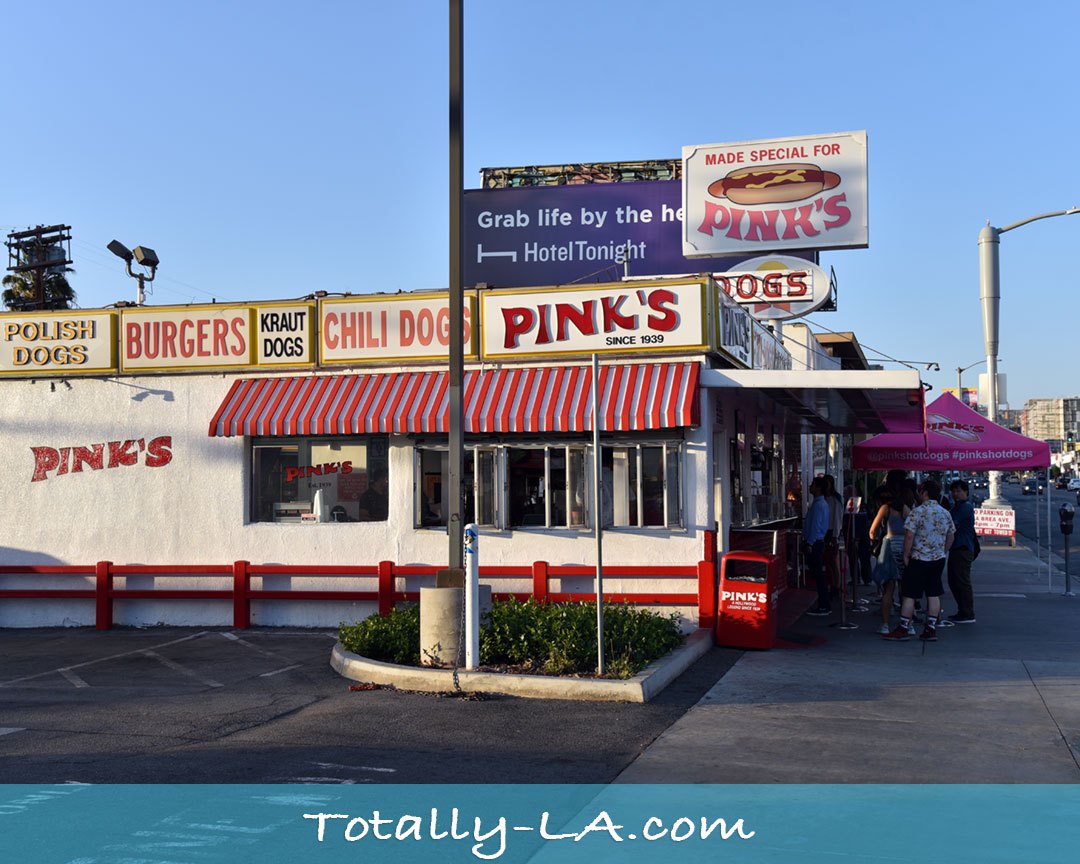 Los Angeles restaurants become iconic for various reasons.  Sometimes it is because celebrities have been known to dine there, or perhaps it has appeared in a movie or three or four. The restaurants we are listing for you to check out here are famous due to how long they have been favorite dining spots in Los Angeles.

Click on the links under the restaurant names for more in-depth information on each one. 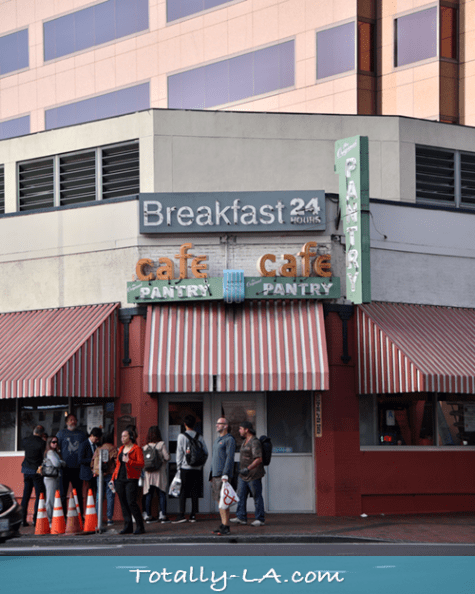 The Original Pantry Cafe is said to have never been closed for even a day since it opened in 1924, even when it was forced to change locations in the fifties to make room for a freeway.  This isn’t entirely true, it has been closed one or two days in that time span but the record is impressive.

It also doesn’t have locks on the doors!  They don’t need them since they are open 24 hours a day.

As for the menu, it’s greasy spoon all the way.  But expect huge portions. For example, the slice of ham on the ham and eggs breakfast is so large that it hangs over the edge of the plate and the fried eggs have to be placed on top of the ham.

The Pantry is considered the most famous restaurant in Los Angeles. it’s so iconic that it’s been designated Los Angeles Historic-Cultural Monument #255

It won’t be too hard to find.  Look for the cafe with the line outside the door. It’s located at 877 S. Figueroa St, Los Angeles… just down the street from the Staples Center, Microsoft Theater, and the Grammy Museum. 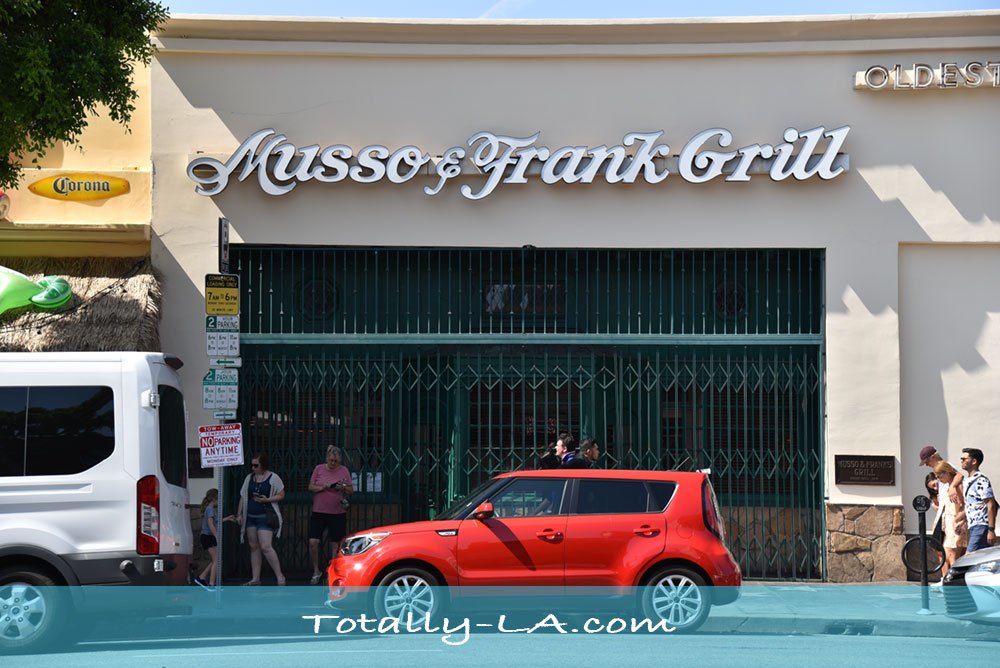 The Musso & Frank Grill’s was opened in 1919 by entrepreneur Frank Toulet, restaurateur Joseph Musso and the French chef Jean Rue. Its history is as rich and colorful as Hollywood itself.

Part of its fame dates back to its early days when silent film stars Douglas Fairbanks and Mary Pickford had the cafe make the recipe for Fettuccine Alfredo they had brought back from Italy.  It became the American birthplace of this favorite Italian dish.

It’s located on the Hollywood Walk of Fame at 6667 Hollywood Blvd. 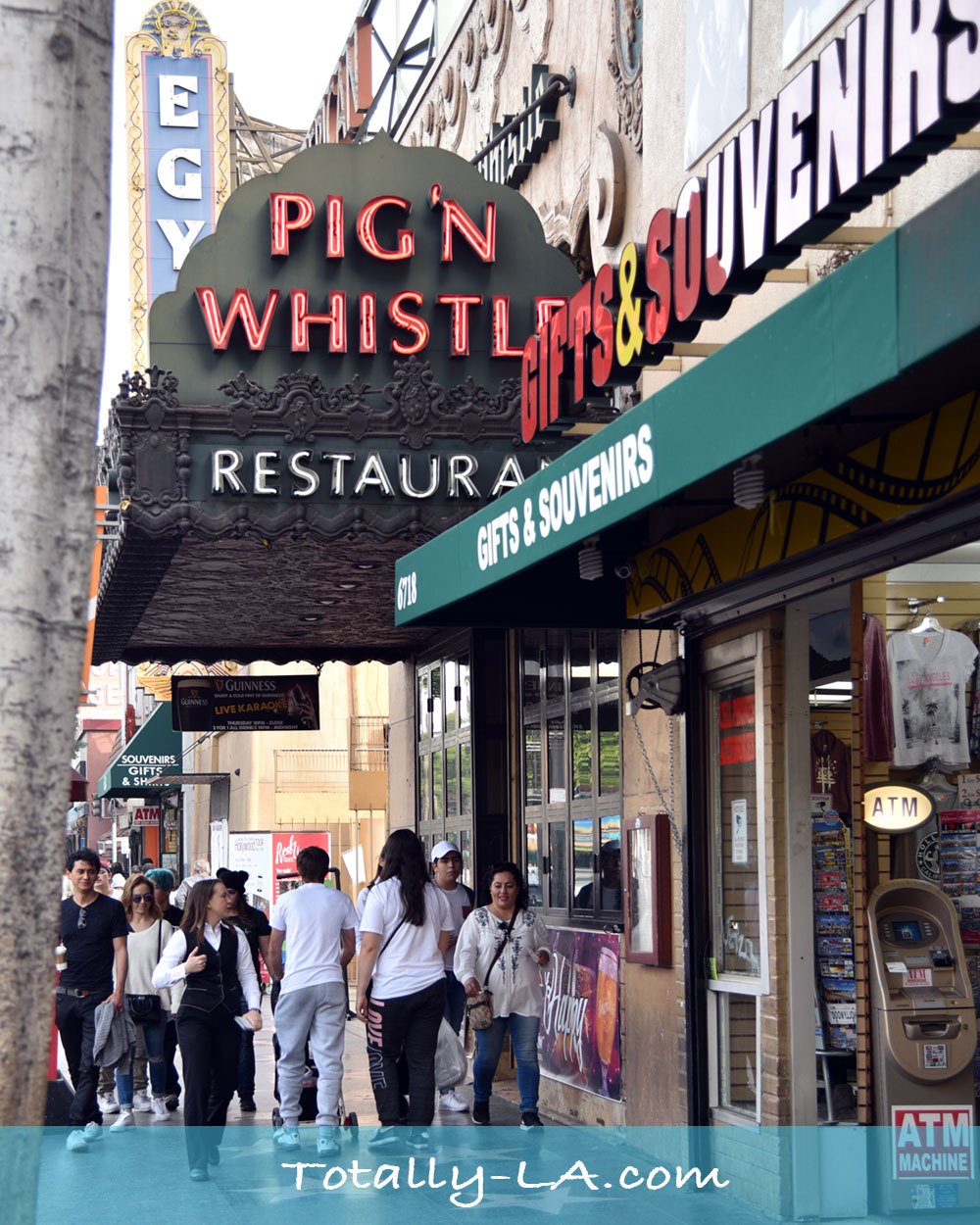 Pig ‘N Whistle opened its doors on Hollywood Boulevard in 1927 to feed the hungry theatre crowds.

Nestled right next to the world famous Egyptian Theatre, the Pig ‘N Whistle is where stars such as Shirley Temple, Cary Grant, and Jane Wyman came to enjoy meals before their movie premiers.  It’s now considered a Hollywood Cultural Landmark.

The English Style Pub hosts live bands, DJs and has a great selection of comfort foods on the menu.

You can find it not far from Grauman’s Chinese Theatre and the other attractions on the Hollywood Walk of Fame at 6714 Hollywood Blvd. 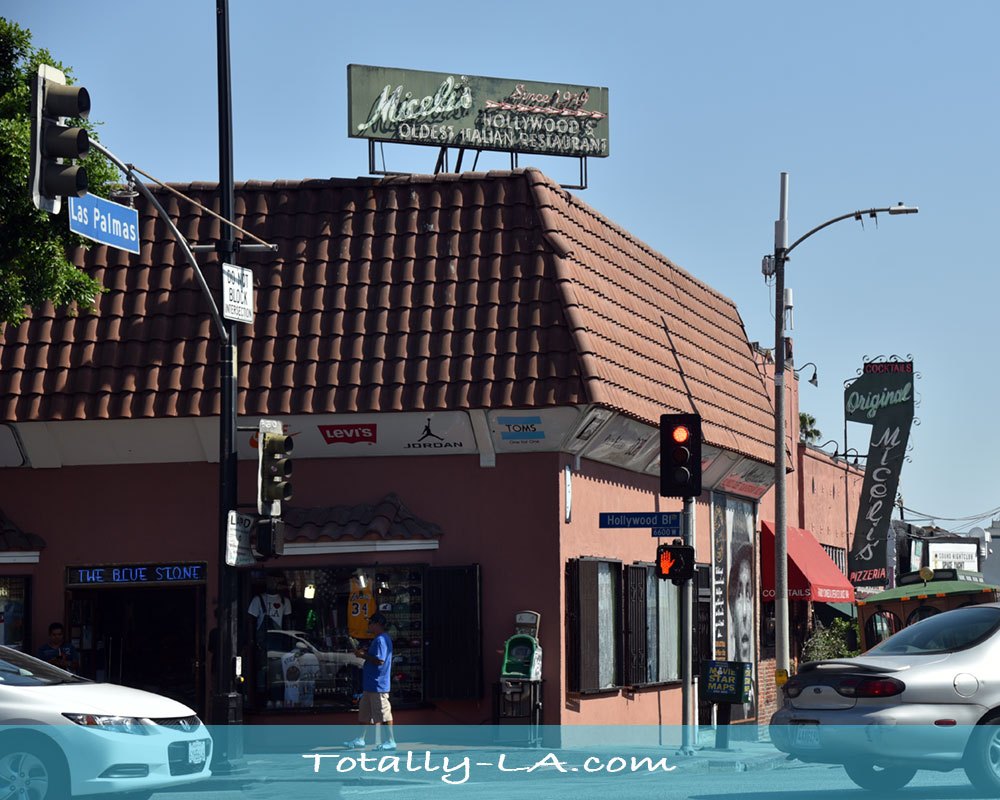 Miceli’s is Hollywood’s oldest Italian restaurant. The dark, carved wood décor, red-checked tablecloths and Chianti bottles hanging from the ceiling are classic.  Add to it the singing waiters that will serenade you while you are dining and you have true old Italian tradition.

It dates back to 1949 when Carmen and Sylvia Miceli along with their brothers and sisters opened Miceli’s Pizzeria using old family recipes brought from Sicily.

Distinguished guests include JFK and Richard Nixon and the Beatles to today’s stars like Jim Carrey, Adam Sandler, and Julia Roberts.

You’ll find Miceli’s at 1646 N. Las Palmas Ave, just off of the Hollywood Walk of Fame.

Pink’s Hot Dogs has managed to get itself on everyone list of place to go in Los Angeles. 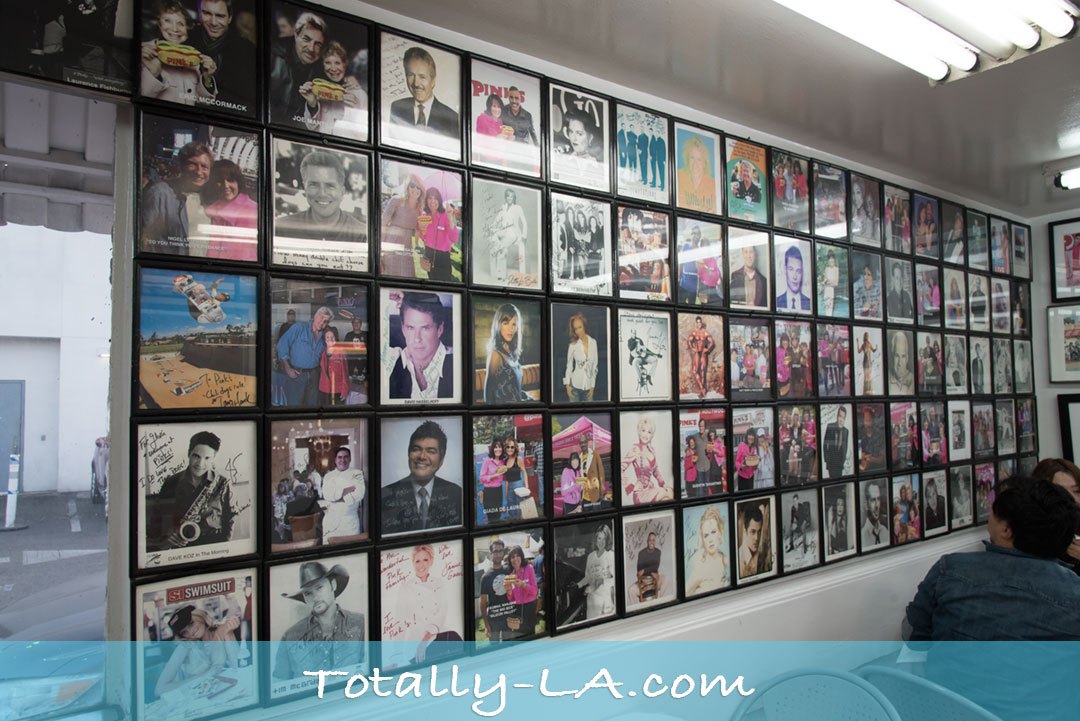 It grew out of the days of the Great Depression when Paul and Betty Pink started out with a hot dog pushcart they worked on the corner near its current location.  A chili dog made with Betty’s own now famous chili recipe was only 10 cents.

The business grew and they built their current building at 709 N La Brea Ave in 1946.   It became a favorite of celebrities and the interior walls are lined with autographed photos of the many celebrities that dined there.  And they they still do at times.

Clifton’s Cafeteria opened in 1935 at its current location in the historic Broadway Theatre District in Downtown LA. The woodland-themed restaurant with decor that includes a fake redwood tree that reaches up through the multiple floors, a forest mural, animal exhibits, a waterfall, and other curiosities. 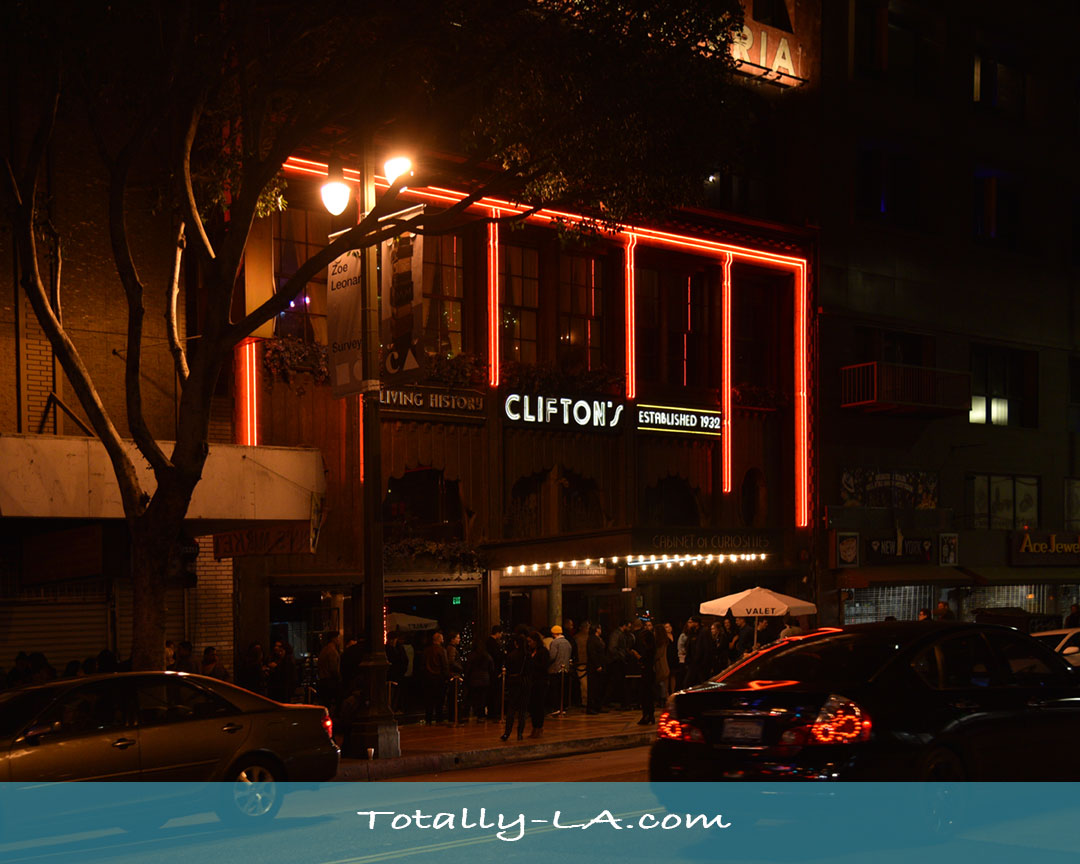 Clifton’s is not your run of the mill cafeteria.

It’s an insanely popular restaurant and despite of seating capacity of 600 people, lines can be seen outside the front door on busy theatre nights.

The cafeteria is divided into five different themed dining areas: The Marketplace, The Monarch, The Brookdale, The Gothic Bar and The Pacific Seas.  Several of these have dedicated booths or areas where luminaries of the past hung out.

An example of such is in The Brookdale, the place where modern science fiction was born.  Science fiction masters like L Ron Hubbard, Forrest Ackerman, and Ray Bradbury met up on Thursday nights and sat on a bench on the second floor of Clifton’s when that back room was known as the Brown Room. There is currently a booth dedicated to where Los Angeles Science Fiction League once congregated.

You’ll find it at 648 S. Broadway near the historic Globe Theatre.

Okay, we’re stretching it a bit here.  You can’t eat at the famous Brown Derby Restaurant, but you can still see it.  Or what’s left of it that is.

Little remains of the famous LA landmark.  But the Brown Derby Restaurant holds a special place in the hearts of anyone that was a loyal follower of the old I Love Lucy series.  It was the setting for one of the most famous episodes of the show.  In the first episode when the show moved from its New York setting to Hollywood entitled, L. A. At Last, the scene where the ever star struck Lucy causes the waiter to hit William Holden in the face with a pie was filmed here.  It was the place to see celebrities and the walls were covered with caricatures of their famous guests.

The restaurant abruptly closed in September 1980.  Preservationists tried unsuccessfully to stop the building from being bulldozed. Somehow the dome and the seating area around it (which formed the brim of the hat) were spared and the domed section of the restaurant was incorporated into the third floor of the newly erected shopping center.

You can find it at 3427 Wilshire Boulevard in what is now named the Brown Derby Plaza.  You’ll find the old derby shaped dome on the back corner of the third floor, above a restaurant called the Boiling crab.

For more restaurants, check our LA Restaurants and Dining Guide category.  If you would like information on how to get your restaurant featured in Totally-LA, contact us.