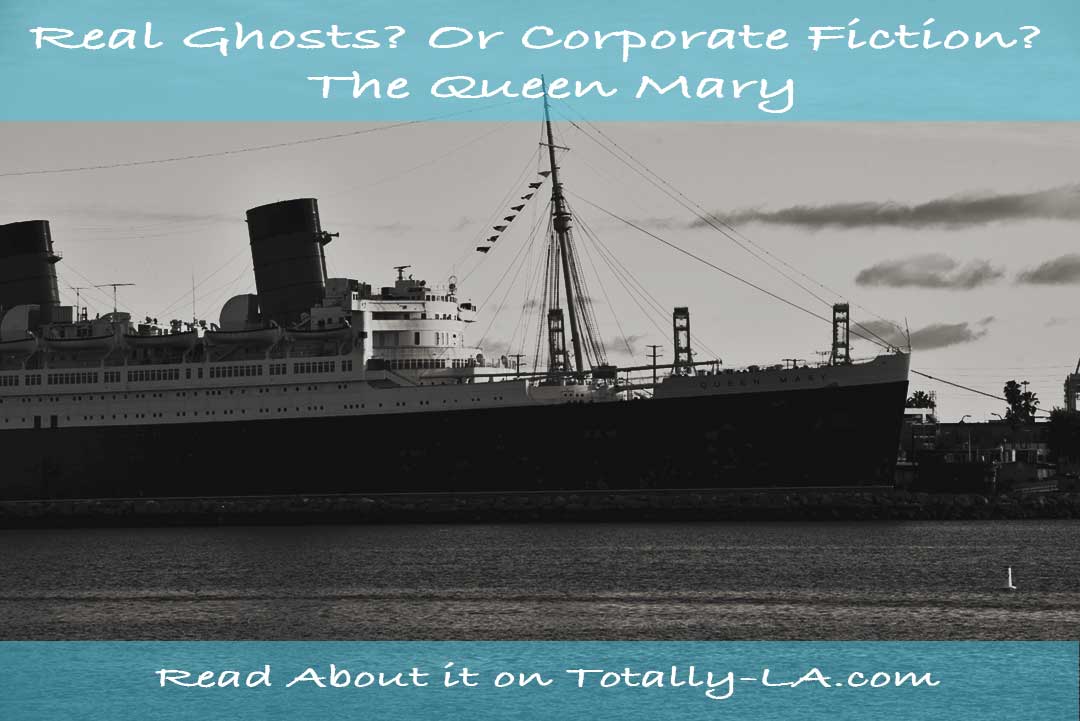 Want to spend a spooky, sleepless night in Los Angeles while you listen to blood curdling screams, doors slamming, and paranormal sights?  Then head on down to the Queen Mary in Long Beach and book stateroom B340.

If you’re into ghosts, you’ll have a great time.  Just don’t plan on being bright eyed and bushy tailed ready to partake in all the fun touristy things to do in Long Beach when you wake in the morning!

Back in the glory days of the RMS Queen Mary there were now ghosts.  In fact the first ghost wasn’t reported until the former luxury cruise ship became a tourist attraction in Long Beach in 1967.  This leaves one to wonder if the ghosts were fabricated to draw attention to the new “resort” or if they are perhaps departed souls from the ocean liner’s days as a military ship.

Shortly after WWII began, the Queen Mary was converted to a transport ship for Allied troops and the ship itself was named the “Grey Ghost.”  In 1942 while carrying 10,000 groups she sliced through her escort ship, the HMS Curacoa and sliced it in half.  239 crew members of the Curacoa perished.  Other deaths occurred on the Queen Mary itself, including a sailor that was cut in half by a heavy door and someone that was apparently murdered in the stateroom known as B340.

The cruise ship has been called one of the top ten haunted places by Time Magazine.  It supposedly has up to 150 ghosts haunting it now.  Stateroom B340 has a large number of paranormal activities recorded in it.  There were so many complaints of faucets turning themselves on, screams, hearing footsteps, toilets flushing etc that the floating hotel stopped renting the room out.  However, after a number of people started demanding to stay in the spooky stateroom they opened it back up to guests.  Now for a mere $499 per night (rates may vary over time) you can scare yourself silly trying to sleep in an otherwise mediocre room.  Stateroom B340 is not one of the posher rooms on the ship! But for that price you get your own Ouija board tarot cards, a crystal ball and even ghost hunting equipment, whatever that is!

From the number of spooky things reported to be going on, you would think the residents of Long Beach would be able to look out their windows and see storm clouds, lightning and apparitions hovering permanently over the anchored cruise ship.

Some of the other paranormal activities include seeing a woman in white sliding across the floor at night, the sound of the boiler room door slamming, and just an overall creepy, spooky feeling in the infamous B Deck (where Stateroom B340 is located).

As such, much of the experience aboard the Queen Mary center around “Haunted Attractions” and “Haunted Encounters” and the “Ghosts and Legends” tours and more paranormal activities.  These overshadow the real history and attraction of the ship to such a degree that Skeptical Inquirer writer Jon Champion called the a cynical exploitation of the ship, promoting it as a haunted attraction while pushing the real history of the ship to the wayside.

So the question is, are the hauntings real?  Or an urban legend fabricated by a well oiled PR machine for the profit of a tourist attraction?  We lean toward the latter.  The reports of the hauntings on the RMS Queen Mary have spread too far, wide and fast to be anything other than the work of an expensive public relations effort.  One that appears to be quite profitable for them.  With the bare-bones stateroom B340 renting for nearly 3x the price of nicer staterooms and the money raised by the haunted tours, it is certainly profitable for the Queen Mary to have LOTS of ghosts!

LA urban legend places a lot of ghosts in various places around the City of Angeles, but there is something quite distinctive about the ghosts at the Queen Mary.  They are the only corporate ghosts in Southern California other than the Halloween spook shows.

Whether the ghosts of the Queen Mary are the spirits that lost their lives on the ship who decided to hang around and amuse themselves spooking tourists, of the creation of a Public Relations agency executive it’s worth visiting the Queen Mary.  It’s a grand old ship that used to carry the likes of Winston Churchill, Greta Garbo and Clark Gable and it’s earned a place on the National Register of Historic Places.  Not for its ghosts, but for being one of the greatest ships ever built.

One last reason to visit the Queen Mary.  In February 2019 the Hollywood Reporter announced that a horror movie entitled The Queen Mary will be filmed aboard the ship.  No information was provided as to when or if it will close down other activities on the ship.  But it could be fun to see “real” ghosts being filmed for a Hollywood movie.

The Pantages Theatre – A Hollywood Landmark