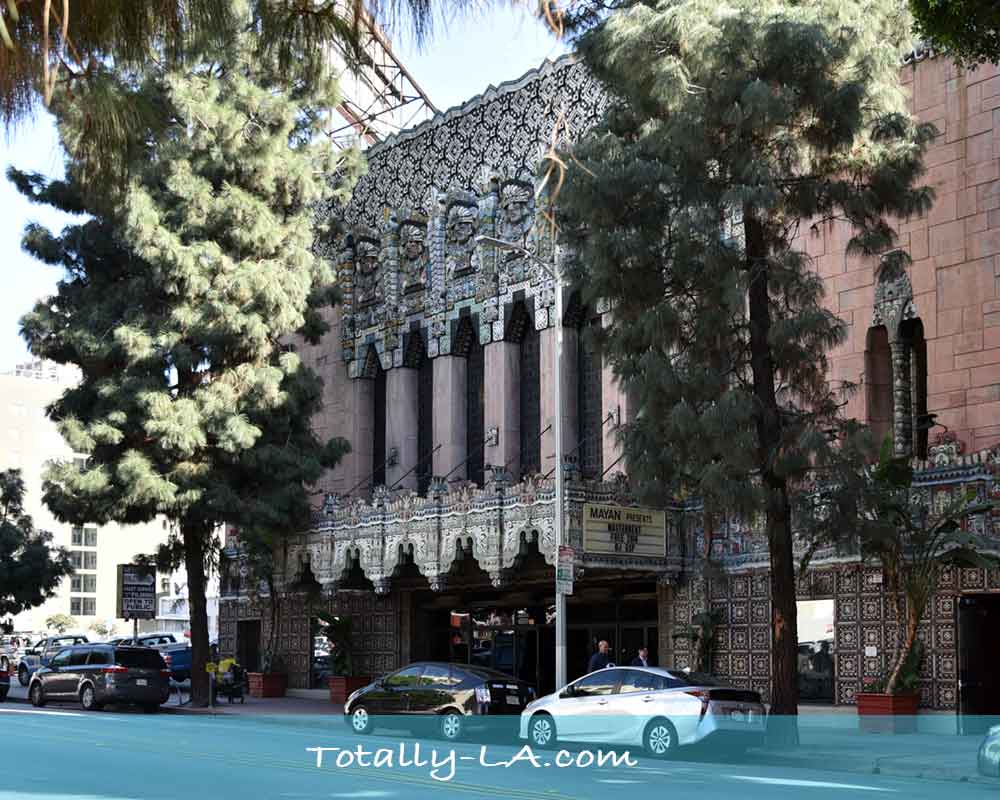 Not all of the grand old theatre palaces in the Los Angeles Downtown Theatre District are on Broadway.  One such example is the Mayan Theatre which is located a block west at 1038 South Hill Street, just south of Olympic.

The Mayan opened August 15, 1927 showing  the Gershwin musical “Oh, Kay!” with Elsie Janis.  The house was managed by the same team that ran the Belasco: Gerhold Davis and Edward Belasco. 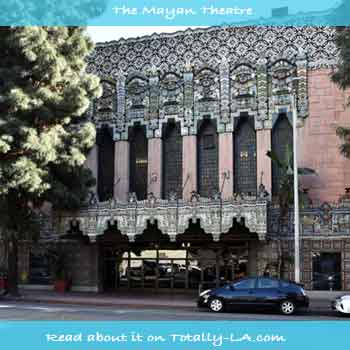 The theatre was designed by Stiles O. Clements whose firm, Morgan, Walls & Clements also designed the Belasco Theatre just south of it.  The elaborate facade of the building features work by sculptor Francisco Cornejo.  The Mayan is another example of the ornate exotic revival-style theaters of the late 1920s, The well-preserved lobby is called “The Hall of Feathered Serpents,” the auditorium includes a chandelier based on the Aztec calendar stone, and the original fire curtain included images of Mayan jungles and temples.

We find Sid Grauman, of the famous Grauman’s Chinese Theatre on the Hollywood Walk of Fame, becoming involved in the Mayan as a producer in 1931. In January 1931 he presented the west coast company of the George S. Kauffman – Moss Hart satire of Hollywood “Once in a Lifetime.”

Grauman followed with a production of Elmer Rice’s “Street Scene” at the Mayan that ran until mid-May. Next was “Mrs Bumpstead-Leigh,” a comedy starring Mrs. Minnie Maddern Fiske. “The Man in Possession” starring Douglas Fairbanks, Jr. was his last show at the theatre. It opened June 19 and closed July 21, 1931. After that the Mayan fell out of the limelight until it started showing Spanish language films (and occasional stage shows) in 1949.

This came to an end in 1989 when the building was  leased to Sammy Chao who turned it into a dance and music club with a distinct Latin flair, the Club Mayan.  It also makes me think of the old Studio 54 in New York City.  Per the Mayan’s website, patrons are greeted at the door by a doorman who makes the determination as to whether their attire is appropriate to be allowed into the club!  Here are some dress tips:

As with most if not all of the theatres in Los Angeles, the Mayan has not only shown films, it has also been featured in a number of them including: The Bodyguard, Save the Tiger, Unlawful Entry, Rock ‘n’ Roll High School, and A Night at the Roxbury.

The Mayan is a grand specimen of LA’s historic architecture and on that has not gone through quite as many painful evolutions as so many others.  It still stands much as it did when it opened in 1927, with the main change being the removal of seats from the main level.