One of the historic gems on the Broadway Theatre District is the Million Dollar Theatre.  Built in 1918, it’s finely detailed architecture dates back to the period when Los Angeles was just beginning its explosive growth as the center of the film industry.

The theatre is the first of several movie palaces built by Sid Grauman who later built the Grauman’s Chinese Theatre, El Capitan Theatre and Egyptian Theater on Hollywood Blvd.  These latter developments were considered partly responsible the the entertainment district shifting from DTLA to Hollywood in the mid-twenties.

The intricate and elaborate sculpting on the building’s facade and the building itself are the work of architect Albert C, Martin Sr who designed the tower, William L. Woollett who was the auditorium architect and sculptor Joseph Mora who created the statues, longhorn skulls and elaborate stonework on the facade.

It’s located on the corner of 3rd and Broadway across the street from the historic Bradbury Building.  It has been a location used in a number of motion pictures including D.O.A., Blade Runner and The Artist.

The theatre  is currently serving as one of six theatres in the Downtown Los Angeles Broadway Theatre District that will be participating in the 2018 Night on Broadway street/music festival this January 27th.  The historic venue will be hosting over a dozen live performances. 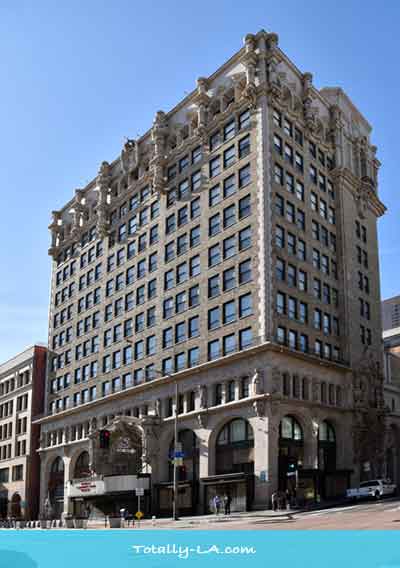 During the forties, the theatre was a house in the Orpheum Circuit.  It hosted such greats at Nat King Cole and others.  Then in 1949 Frank Fouce, a local Spanish language theater owner and film distributor took over the theatre whereupon it became a mecca for Spanish and Mexican entertainment.  Fouce expanded his theatre operations to include the Mayan Theatre.  His actions brought the Spanish entertainment industry into popularity and every major Mexican motion picture premiered at the Million Dollar Theatre.

Th theatre also showcased popular Spanish theatre and stage performances.  During its heyday, lines wrapping around the block to get in resulted in police frequently closing Broadway to traffic.

In 1984, downtown visionary Ira Yellin, a successful developer, bought Grand Central Market and adjacent properties including the Million Dollar Theater, as well as the landmark Bradbury Building across the street.

It is returning to a role of prominence in DTLA’s Historic Core as part of the Grand Central Square project mentioned above and there are a number of live performances occurring.  For the calendar of events occurring see the Million Dollar Theatre website.