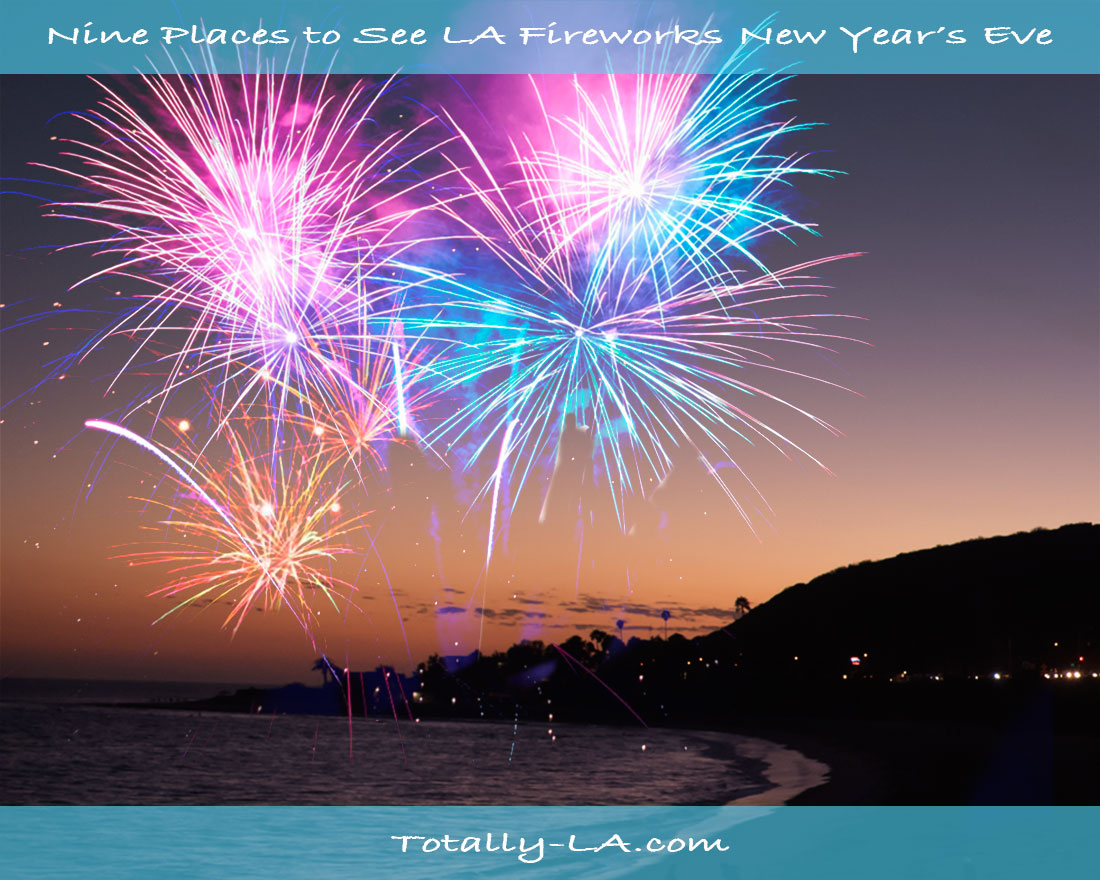 I’ve rounded up the nine best places to see Los Angeles fireworks this New Year’s Eve. I really think there should be more, but this is all I have found so far.  I will post updates as I find them. You might want to also see our post on vantage points where you can watch several New Year’s Eve fireworks displays at the same time.

Fireworks are one of the most photogenic subjects you can find too, so be sure you bring a good camera and tripod.  I culled together some of the cameras I use in the Amazon ad below.  Even though it is an affiliate ad, these are the cameras I use on a daily basis and I swear by them!

Knott’s goes all out during the holiday season, turning the theme park into the annual Knott’s Merry Farm with holiday decorations, music, snow and a lot of appearances by Snoopy. On New Years Eve, the hours are extended (10am on Dec 31 to 1am on Jan 1), and there is a countdown to midnight and fireworks. There is also live music throughout the evening, as well as en evening buffet at Spur’s Restaurant.

The Marina del Rey Hotel has put together a special fireworks watching package for New Years Eve.  Called Midnight on the Marina, you can dance the night away on the pool deck to music by top DJs, enjoy live music on the event lawn and enjoy  not one, but two dazzling fireworks displays over the Marina at 9 PM and Midnight.

It includes an overnight hotel stay, late check out on New Years Day 2010, a complimentary bottle of champagne, complimentary valet parking and more.  Ring in the new magic of 2020 with a complimentary Champagne Toast at Midnight.

Marina del Rey’s annual New Years Eve fireworks is probably the best in Los Angeles. There are two fireworks displays and somehow fireworks are so much more spectacular over the water. There are several ways to see this show. The fireworks are set off at the park and can be seen from surrounding restaurants that have outdoor seating as well as, of course, from in and around the marina itself, from the local hotels (consider booking a Marina del Rey hotel for the night with a high up balcony overlooking the marina) and from Fisherman’s Village.

The park will hold an outdoor screening of New York City’s ball drop countdown starting at 7:00 pm. At 9:00 pm, there will be the first fireworks show. The second fireworks show will start at midnight.

Fireworks at The Queen Mary

For an upscale, romantic experience, spending New Year’s Eve on the Queen Mary is an excellent choice. The Queen Mary will celebrate decades of decadence with a New Year’s Eve: Past and Present party. The ship’s decks and ballrooms will be brought to life with live music on multiple stages, dancing, themed experiences, entertainment, food and a Roaring Twenties flair.

The party starts promptly at 8:00 PM and one of the most spectacular fireworks displays in Southern California happens at midnight.

The fireworks being set of on or near the Queen Mary will be easily visible from any establishment that has a line of site view of the harbor.  Those familiar with Long Beach will probably know some “secret” or special spots to watch from but it should be a great night to be near the water in Long Beach regardless.

Some of the Yachting companies and cruise lines are doing special New Years Eve Harbor Cruises to party in the harbor and watch the fireworks.

There is the 21+ New Year’s Eve Fireworks Cruise on a VIP yacht.  It features an open bar, DJ, dancing and the fireworks.

For those who fancy seeing two or more fireworks shows near the beach, the pier at Santa Monica is the place to be. The park is open until 12:30 am and those who find themselves strolling the beach on New Year’s Eve will see the fireworks from Marina del Rey as well as firework shows being set off by private parties just north in Malibu.

Double the Magic! There are two countdowns to midnight. One at New York Time, one at LA time.  You can watch one or both. Join the countdown during the happiest New Year’s Eve on earth with fantastical fireworks at 9:00 PM and midnight.

Spend the day enjoying the rides, shows and other attractions.  Then as evening arrives enjoy parties, music, dancing, drinks and a midnight countdown and fireworks.

I hope you’re able to enjoy one of the fireworks displays this New Year’s Eve and that you have a very happy new year. 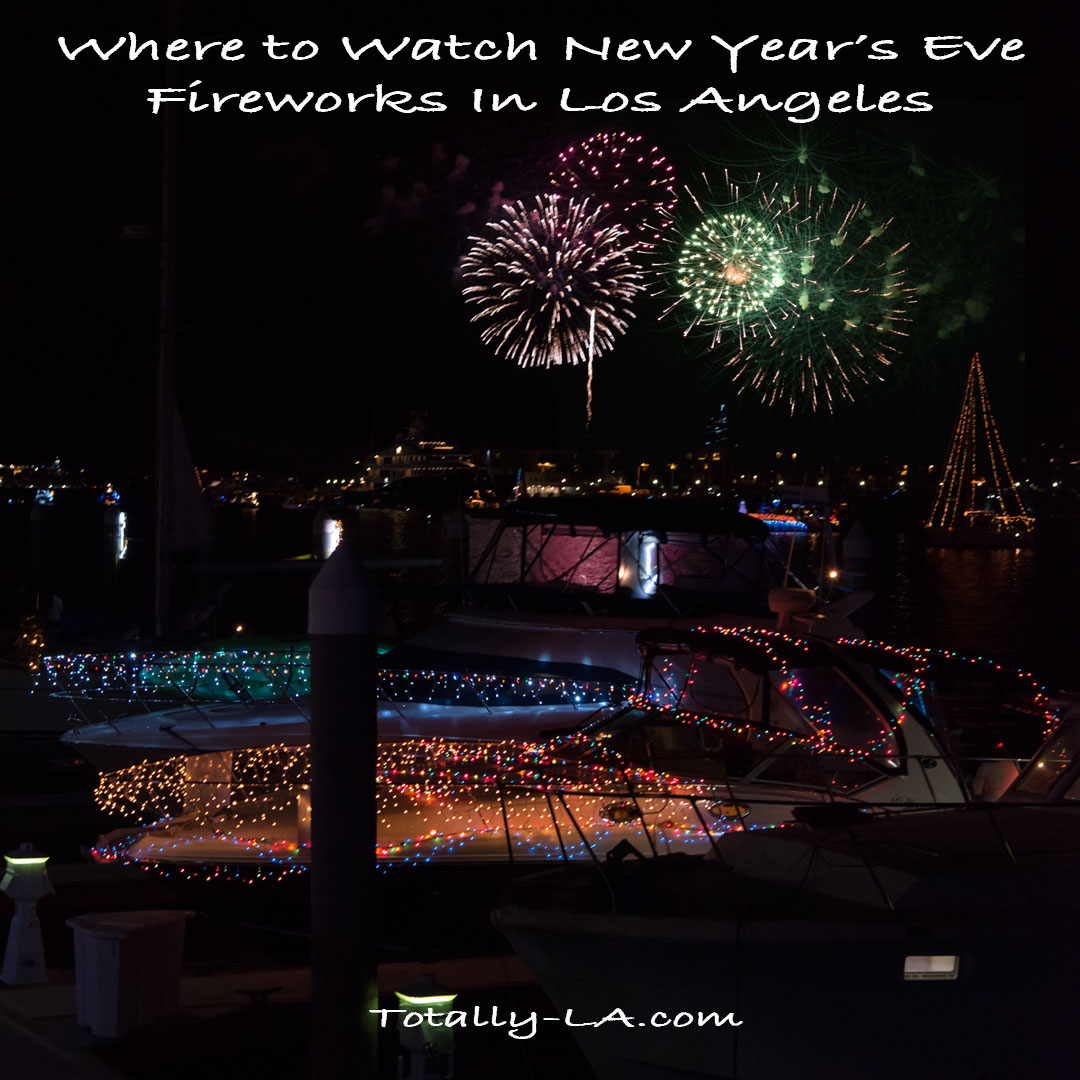