Though many like to refer to the San Gorgonio Pass Wind Farm as “blight” I personally consider it beautiful. However, I learned it may have a very real, but unseen impact on Palm Springs residents.

Update: I had always thought that the radioactive wast from nuclear power plants was transported to “isolated” areas in the southwest and tucked away in the mountains in sealed containers.  This is at best a temporary solution.  However I learned from Dr Mercola in a newsletter a few days ago that the most common practice for disposing of radioactive waste was to put in in barrels and dump it into the ocean.  That practice has been outlawed, but the barrels have all corroded releasing the waste into the ocean and our food chain.  Worse, the nuclear facilities have bypassed the prohibition though a loophole that allows them to pipe the radioactive waste directly into the ocean.  We need to pressure congress to ban all new nuclear power plants and begin taking the ones we do have offline permanently while we still have a planet that will support life.  Read about nuclear waste dumping into our oceans here.  That said, wind power has my full support!

The San Gorgonio Pass Wind Farm is one of the largest and most productive in the nation. It sits right where you turn off the 10 freeway onto highway 111 going into Palm Springs and it provides power to all of Palm Springs and the Coachella Valley. It also happens to sit almost dead on the San Andreas Fault line which is just a few miles east. 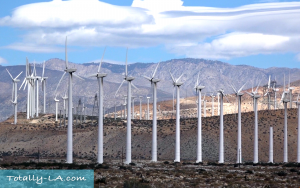 This brings me to the point of this post. I travel frequently to Palm Springs to film a show I produce. I noticed each time a vibration in the house when I would sit down to take a break. It’s frequency would appear to match that of the sound made by a high voltage power transformer. It seemed to run in about a 2 foot wide swath through the house so I inquired if there were underground power lines. No there were not.

Later I was outside leaning against one of the cars and noticed it again. I commented on this to the others on the set. All of them were Palm Springs natives and had grown used to it and didn’t notice it until I pointed it out. Then they felt it too.

The final part of that episode was filmed in a club several miles away. While working I didn’t notice it (also true back at the house), but when I sat out on the club patio to take a break, there it was again. And again others felt it when I pointed it out. 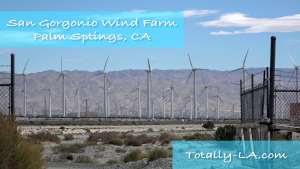 This got me curious. Would there be ground vibrations as a precursor to an earthquake? I googled it and learned that electromagnetic waves can be a warning sign of an imminent earthquake. Animals are sensitive to this and can become quite agitated prior to one.

I also learned that there is a constant “seismic noise,” also a vibration, in the earth. It is used to predict what will happen if and when an earthquake does occur, but is not said to be a predictor of one. One of the things learned from this was that if an earthquake was to occur at the San Andreas Fault near Palm Springs, the geology is such that the shock waves would be forced into a narrow channel following the 10 freeway into downtown LA and would be greatly magnified when it hit DTLA.

This still didn’t answer the question about the persistent and noticeable ground vibration in Palm Springs. The “seismic noise” of the earth is not supposedly detectable by humans. Then I became curious if the San Gorgonio Wind Farm Played a role in it. Sure enough, it does.

According to articles I found on the net, seismologists say wind turbines produce airborne infrasound plus ground-borne vibration up to about 7 miles from the farm. The farm studied was considerably smaller than the San Gorgonio Wind Farm so the impact felt in Palm Springs could be much more noticeable. Apparently they put out a high frequency sound from the blades, and a low frequency vibration as well. And when I stopped to consider that one of the blades on a wind turbine is half the length of a football field, and that the larger ones stand 150 feet tall, the poles must run very deeply into the ground. This could account for a very considerable amount of ground vibration!

If this is something you have been curious about, you will need to do your own research. Wind Farms are relatively new, and the information about their impact on human health and the environment is also new and space. I did see in one article that while you can’t hear the sound frequency emitted, the ear does still sense it and it produces various signals to the rest of the body.

I did have a disturbing thought about this too. When you have a wind farm putting out such vibrations as to be felt through most of Palm Springs, and that farm sits atop the San Andreas Fault, could it cause instability on the fault line and prematurely trigger an earthquake?

That was only a “thought” and I have seen no scientific literature indicating it could be a possibility. And when all is said and done, if given a choice I would have voted in favor of installing the wind farm. Any time you harness energy, there is risk. But with whatever risk there may be with wind farms, it is almost nothing compared to the alternatives.

Nuclear power plants have proven to be anything but a “clean” energy source and can cause irreparable damage to the planet on a wide scale. Particularly when they are built on fault lines such as Fukushima Daiichi nuclear disaster in Japan (I remember learning as a kid that they were building it on top of an earthquake fault line and being told it was totally safe. I though they were insane and unfortunately I was right), or earthquake prone areas such as the San Onofre Nuclear Generating Station on the beach in San Diego County. It isn’t a matter of if an earthquake will cause a nuclear disaster, it is a matter of when. Hopefully we will wake up to this issue and both stop building new ones and decommission those that are in service. We simply can’t bear up to any more radioactive incidents on this small planet.

About the only other source of clean energy I can think of are hydro electric plants. There is of course the chance of the dams breaking, but the condition of the dams can be monitored. 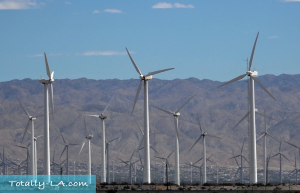 So as far as the Gorgonio Wind Farm goes, it’s big, its beautiful (at least to me), and it powers the entire Coachella Valley. Almost all of the currently installed wind electric generation capacity is in California. The high-tech megatowers are engineered in cooperation with NASA and nursed by federal and state subsidies. This wind farm on the San Gorgonio Mountain Pass in the San Bernadino Mountains contains more than 4000 separate windmills and provides enough electricity to power Palm Springs and the entire Coachella Valley.

You can get behind the fences and tour the Palm Springs Wind Farm here.