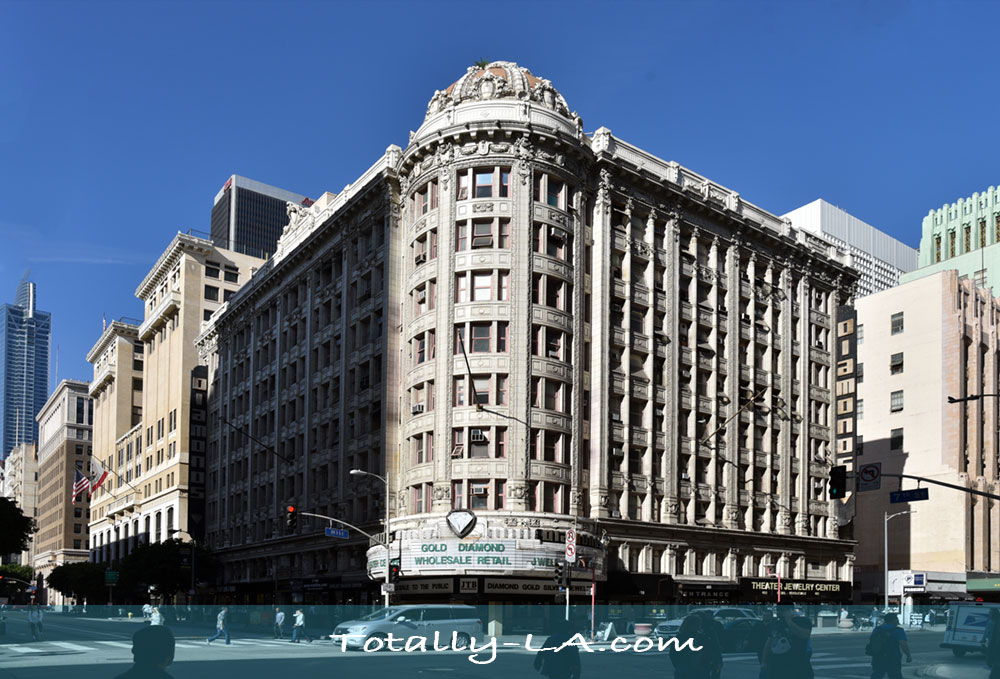 I doubt anyone in the world hasn’t heard of the Pantages Theatre on Hollywood and Vine.  But very few know there was once a much grander Pantages Theatre in downtown Los Angeles just off Broadway.

The downtown Pantages Theatre opened in 1920, ten years before the Pantages on Hollywood and Vine opened its doors on June 4, 1930.  It’s a nine story steel framed building (built during an era when I believe most used concrete support) designed by architect B. Marcus Priteca.  It was LA’s second theatre built for the Pantages vaudeville circuit and the 16th in the country.  It’s an ornamental Beaux Arts building that contains shops along the street level, offices on the upper floors and a 2200 seat theatre.

The downtown Pantages became the Warner Brothers Downtown Theatre in 1929.  Later it became Warren’s Theatre until that closed in 1975.  After a short stint as a church, it was converted into retail space as the Downtown Jewelry Exchange, which it remains today. 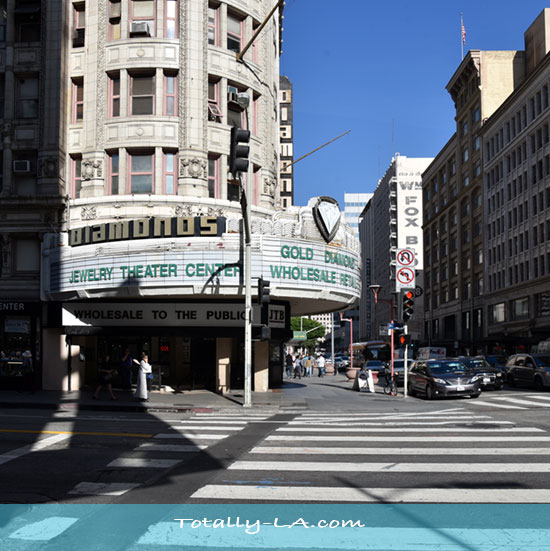 Much of the interior of the theatre’s baroque ornamentation remains. The elaborate coved auditorium ceiling features a sunburst mural surrounded by Egyptian, Oriental, Greek, and Roman figures. The figures are still intact, although a modern chandelier obscures the sunburst. Flanking the stage are the original Corinthian columns.

In 1929, the theatre became the Warner Bros. Downtown Theatre and eventually became Warren’s Theatre. When the theatre finally closed in 1975, it was used as a church and then converted into retail space as the Downtown Jewelry Exchange in the late 1980s.

Much of the original interior of the theatre’s baroque ornamentation remains. The elaborate coved auditorium ceiling features a sunburst mural surrounded by Egyptian, Oriental, Greek, and Roman figures. Flanking the stage are the original Corinthian columns.

Likewise with the Warner Bros. legacy. The familiar Warner Bros. emblem is visible behind the current diamond motif above the buildings’ corner marquee.

If you are visiting Los Angeles, you can, and should, step inside the building to see what remains of the grand old Pantages Theatre.  But be advised.  They aren’t big on letting you take pictures of the interior of the building, particularly if you camera looks professional (that seems to generally mean it has a detachable lens).  While you are in the area you might want to check out the famous Bradbury Building about 6 blocks away and the grand old theatres in the Broadway Theatre District a block east of it.  You can read about some of them in our LA Theatres section.

Why LAX is Still Deserted, a Year After the First Lockdown

Silent Night: The Beauty of Christmas in Los Angeles 2020