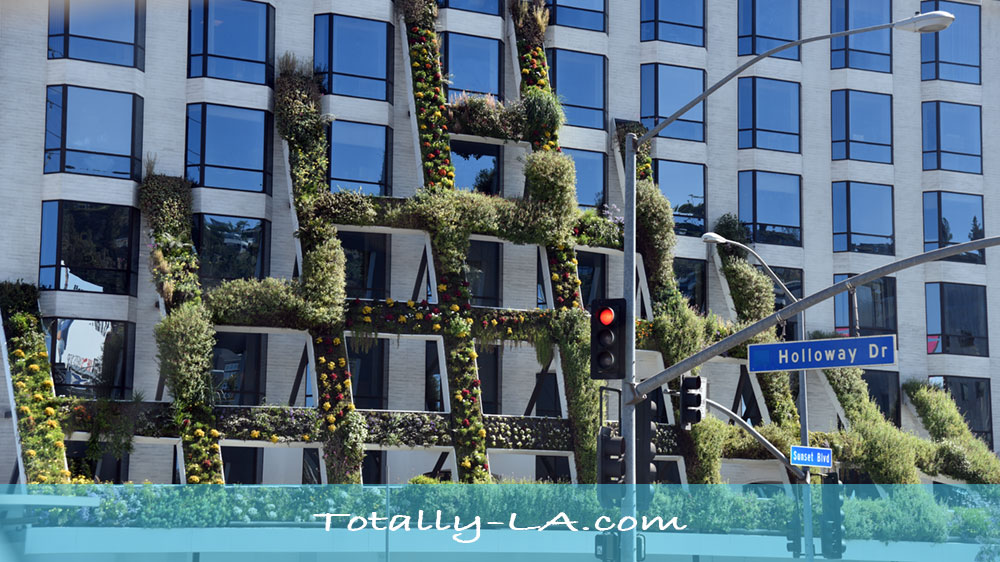 Vertical gardens as a solution to air pollution and noise pollution are making headlines in major cities in other parts of the world. It makes good sense.  Our cities are 90% concrete it seems and there simply isn’t enough plant life in a city like Los Angeles to keep the balance of nature in place.

Unlike cities in other countries that have incorporated vertical gardens into the tallest skyscrapers, support columns for freeway overpasses and the noise walls along freeways traveling through residential neighborhoods, in Los Angeles we hear only of the residents that have stacked planters on their balconies to grow fresh vegetables.

Yesterday I was thrilled to see the vertical garden on the building pictured above while driving out on the west end of Sunset Blvd.  It’s not really the largest but it is a step in the right direction.  There is also a building downtown that is suppose to have a large vertical garden. I haven’t seen it but it’s an 80 foot tall vertical garden in a cluster of three office buildings near Pershing Square.

I can only hope Los Angeles will do what it can to follow the lead of Mexico City which has gone all out in employing vertical gardens to combat both air pollution and noise pollution.

In most cities, massive concrete acoustical barriers line urban and suburban highways to combat noise. California alone has 760 miles of sound walls. While the acoustical noise walls provide some relief from noise pollution they are unattractive and do nothing to reduce air pollution and carbon dioxide levels.

In Mexico City where over 20 million people are crowded together and air pollution was a serious problem, a project was started in 2012 to construct vertical gardens on the concrete columns that support elevated roads in the city.  More than 640 square feet of vertical gardens have been constructed on over 1,000 columns in the city.  The goal of the project is to plant enough vertical gardens to eliminate carbon emissions and lower noise pollution.  It has also been estimated that the gardens have reduced vehicular noise pollution by ten decibels, more than the reduction gained by LA’s current noise walls.

The plants use a natural rainwater irrigation system for nourishment and the gardens are constructed so the plants will not damage the structures they are growing on.

According to a study published in the ACS Journal of Environmental Science & Technology, the amount of reduction in pollutants caused by increasing foliage is nothing to be sneezed at!  The study found that “urban street canyons” can reduce the two most worrisome air pollutants by eight times more than hoped for.

The study concluded that placement of grass, climbing ivy and other plants in “urban canyons” can reduce the concentration at street level of NO (nitrogen dioxide) by as much as 40 percent and PM (microscopic particulate matter) by 60 percent.

It is also no secret that automobiles emit carbon dioxide, which is the current scapegoat for global warming.  Plants actually breathe in carbon dioxide and convert it into oxygen for their fuel.  While there is also some flimsy research purporting that plants too cause global warming (god help mankind if our plants are what is going to kill us all), any program that will increase the amount of plant life that is converting pollutants into the oxygen we need in our city would get my support.

So, LA, what are we waiting for?  Let’s get serious about putting some vertical gardens along our ever abundant freeways and see how much nicer our city will be with a lot less pollution and noise.

Behind the Scenes as Conservative Preacher Takes on Transgender Artist

The Face Mask as the New Fashion Accessory